The Towers of Tibet

The Towers of Tibet

The Himalayan Towers are a series of stone towers located mostly in Tibet. Carbon dating shows they were built approximately 500 to 1,100 years ago. Strange that some of them are star shaped similar in star shape of the forts and castles.

Much thanks this is good!

They remind me of meat smokehouses, or secure store houses for meat.

Awesome! I'm glad that this subject has been posted.

I haven't watched all of the video yet, are they hollow inside, is there access from the inside to the tops of the towers? maybe everybody had their own dirigible and had to tether it someplace.

I think the watch tower/signal towers is a good explanation, except that they seem too close together, if they were used for signal fires, they could have been built a lot further away from each other.
Dreams are real while they last, can more be said of life.
Top

to cure and drying foodstuffs. It would be away from animals.
Top

Could also be used to identify the paths of stars and planet from the ground or on top on the towers by using points of the roofline as a reference or to tell the time of day as a clocktower. Maybe it was easier the sound alarms from them.
Top

Himalayan Towers is also referred as “Stone star-shaped tower.” These are a series of stone towers where the major part of the tower is located in Kham with minor parts in various cities like Changthang, Miniak, Kongpo and Gyalrong. It is believed that this tower is very old and may have been built anywhere between 500 and 1800 years ago. The star shape was constructed to strengthen the towers.

here is as good an explanation as any, I think after looking at so many pictures of them and their exact locations, there is no real pattern, but some certainly are close to each other. I have to do some more thinking. But I don't think they had anything to do with religion. Not everything in ancient times was about religion, I think there was a lot of greed and war at times. In my minds eye I see vast industrial city/complexes and people toiling in the earth for precious minerals. At one time I see this planet almost scraped clean of all of it's resources. Oh, I'm rambling again.

This article goes with Bob's side by side tower picture above.

Frederique Darragon is a French explorer known for her documentary film The Secret Towers of the Himalayas, which chronicled her expedition of the mystifying stone towers of Sichuan and Tibet.....old stone towers, some vaguely star-shaped and some more than 100 feet tall, scattered across the foothills of the Himalayas. Yet when she asked local residents about the towers—Who built them? When? Why?—nobody seemed to have a clue.......they were built 500 to 1,100 years ago......One structure in Kongpo, Tibet, a day's drive from the capital, Lhasa, proved much older. It was likely built between 1,000 and 1,200 years ago, before Mongolian tribes invaded Tibet, around 1240....

Darragon was especially intrigued by the more than 40 roughly star-shaped towers she encountered. Some have 8 points, others 12. In both configurations, star-shaped towers are rare, scholars say. At least two others can be found in Afghanistan, including the Minaret of Bahram Shah in Ghazni.

Why were they built? One idea is they served a religious function, perhaps representing the dMu cord that, according to Tibetan legend, is said to connect heaven and earth. "The towers might actually symbolize this cord," says Bianca Horlemann, an independent Tibet scholar....
Darragon found that many of the villages where the towers are located bear the same names as 18 kingdoms described previously only in legends.

According to Bon tradition of Tibet, Tibet had written language several hundred years before the time of Emperor Stongsten Gampo. Professor Namkha's Norbu has documented that in his book called Neclace of Dzi. The legend has it that ancient Bon kings would climb up the stair to the heaven when they are about to die. This could be some form of sky burial for the kings and nobels of the time.

The natives had a strange name for the towers . . . bdud khang, or "demon houses." All were open structures, most had window type openings at different levels, and were several floors or stories tall. No one knew why they were built or who make them.....The Kongpo people consider themselves Tibetan. "They all believe in the creation myth of the children of the she-demon and the monkey....The contemporary Jiarong and Minyag people as well as the Tamang of Nepal, who are also Buddhist, and the Qiang Zu, who are not Buddhist, also believe in the same creation myth.

The so-called "demon-towers" (bdud khang) of Kongpo which I visited in 1967 are interestingly shaped as twelve cornered mandalas and clustered in groups of three. These towers are believed to have been built, not by humans, but by aChung, the king of demons in the Gesar Epic. R.A. Stein writes in The World in Miniature how "such dwellings and defence towers are noted by Chinese texts from the Han, Sui, and T´ang (second to eighth centuries) in connection with independent kingdoms and peoples of Tibetan stock.....In many cases, ancient stone masonry in Bhutan and Tibet appears to be of quite astounding quality, which may contribute to the common belief that some of these old structures were built by non- humans.

The Ideal of Nine Stories Many of the old tower structures may originally have had nine floors, as this is an ideal, auspicious number with ancient roots in shamanistic mythology. Such symbolism is also described by Stein explaining how this ideal was applied to a vertical hierarchy revealed by the number of stories; "The king (or queen) had as many as nine, the people up to six."

A similar numerology is also reflected in an old Bönpo (bon po) text from the twelfth century published by Samten Karmay which relates how palaces are to be organized.This text describes how various functions are to be adapted horizontally within a 3x3 pattern, according to an ideal which buildings were striving to achieve. By following "the rules of Shenrab, the radiant clarity will cause blessings to descend." The buildings would then please the gods and attract divine presence.

Watchtower in Shuopo township Rongzhag is famous for "Thousand stone castle kingdom"with many kinds of old stone castles (watchtower, "Qionglong" in ancient) scattered over the county, Built as early as 1700BC, the watchtowers in Shuopo village varies greatly.

The height of watchtowers are between 16 and 35 meters, they stand on hillsides or the top of hills with stone slabs for their walls and stone blocks for their foundations. Usually the watchtowers there are designed as polygonal shapes, such as square, pentagon, hexagon, and octagon etc. The best ones have 13 sides and serve as watchtower pearls in Damba area (only 3 13-sided watchtowers left in Gyarong Tibetan area). There are four kinds of watchtowers in Rongzhag according to their different use: Strategic Pass, Beacon-Fire, Village and Dwelling, most of them are well protected.

Danba has preserved four kinds of watchtowers: Yao`ai (Strategic Pass), Fenghuo (Beacon-Fire), Zhai (Village), and Jia (Dwelling). The Yao‘ai watchtower was built at passes and places of strategic importance. "If one man guards the pass, ten thousand can not get through"; and these watchtowers are testaments to this old Chinese saying. The Fenghuo watchtower was built on hilltops for the purpose of transmitting messages. To protect inhabitants and property, the Zhai watchtower was built at the entrance of villages. The Jia watchtower was built inside the village and was connected to the dwelling houses. It was used as storage in peacetime and as a defense during wartime. All of the watchtowers in Danba have a door fitted about five meters above their foundation; and people must climb a wooden ladder to get into them. When the villages were invaded, people hid in the watchtowers. They drew back the ladder and closed the door so that the invaders could do nothing against them. The watchtowers also have apertures from which archers could shoot at invaders
Dreams are real while they last, can more be said of life.
Top

I had never heard of these towers, before. I loved that video! These towers are amazing!

In a few of the shots, the way the towers were lined up reminded me of the way that power lines are strung from one pole to the next (at least, they are, here in the US). It doesn't seem like that would be the case though, because they're too far apart. But they're close enough that they are clearly part of something that works together. (I'm not buying the theory that they are an expression of ego. And the fact that all of their writings have gone missing stinks of the parasites. One of the first things the Israeli Zionist movement did after attacking the native Palestinian population ... was to burn all of their books. It is on-going.)

So... what are some more possible theories about what purpose these towers could have had? Were they transmitting something? ... multiple towers creating a 'field' of energy? Is there any common ground between the form and function of the star shaped towers and the star forts? It seems plausible that the star shape gave them more stability, for sure. Does that, then, also apply to the star forts in some way? Stability? coherence?
"Men think in herds, go mad in herds, but recover their senses one by one." -- Charles Mackay
Top

Just an association: the pagodas. https://en.wikipedia.org/wiki/Pagoda

While living in HCMC, Vietnam, the pagodas were just about the only tall buildings I saw. In addition to some tall hotels and some other tall modern buildings. 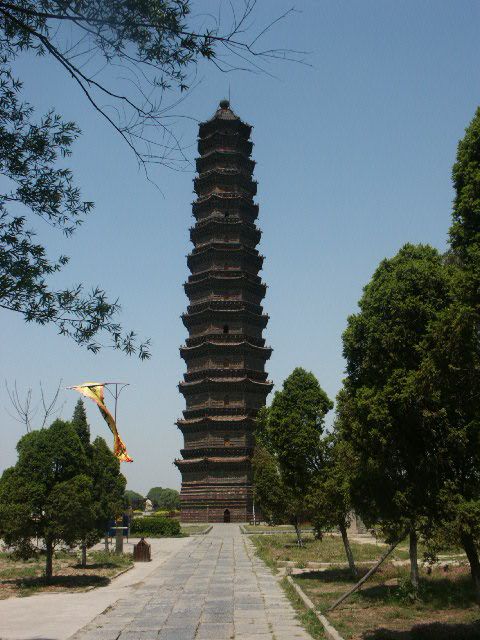 Looks like they're hexagonal to me. However, not all of them. Check out the cool "antenna" on top of this 4-sided one:

However, just an association. Point being that tall buildings were not too common in Old Asia. Well, same thing everywhere else, or?
Forum Admin
Top

OOOoooOOO! Those pagodas are cool! And that antenna IS very interesting. Makes me think of a Tesla coil. Has there been any stated or historical mention of their purpose and how old they are? And if there used to be more of them?
"Men think in herds, go mad in herds, but recover their senses one by one." -- Charles Mackay
Top

I don't really know anything more about this.

But you may wonder why Buddhist monks, who supposedly are content with looking inward in meditation, would build tall towers. Why? To see Uncle Bob before he comes and then have the coffee ready?
Forum Admin
Top

Lol!
We are a coffee obsessed group, aren't we. Heehee

<--- testing. Ha! it works!
put :SubjectThatMightHaveAnEmoji: between semi-colons: Love it.

"Men think in herds, go mad in herds, but recover their senses one by one." -- Charles Mackay
Top
Locked
12 posts • Page 1 of 1