I agree with the points our Sylvie makes here:

And I would like to add some thoughts of my own.

Now the new Blade Runner is out - along with so many other, like BR more or less dark and dystopian, Sci-Fi movies and TV series. What is the 1 thing that annoys me with these movies and shows? It is this: Even far into the future we still have big, heavy noisy machines spewing smoke and pollution. Why so - when we're supposed to have developed by then? Where's the development?

The *only* (movie)/series that has done it right is Star Trek, with its many silent and non-pollutive technologies. Although I agree with Sylvie that watching TV/movies is harmful in general, I'd actually recommend Star Trek (not the new stuff which is awful, but the first 4 series). It even has great medicine technology - of exactly the kind we should be able to have in the near future. And in some cases: We already have it, but it's not yet mainstream. 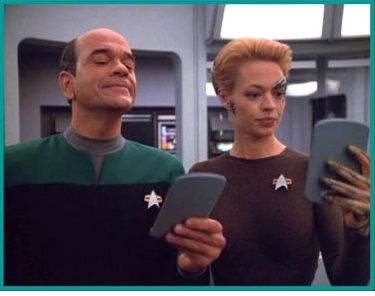 I thought the new Blade Runner awful. Dark and depressive and ... boring. And I guess this is all the Parasites are able to envision as our future?

As for "Ancient Aliens" I'm not really able to watch that show. Everything is in super fast motion - flash! flash! flash! - with frantically dramatic - or spooky - background music and all kinds of sound effects that makes the show impossible for me to enjoy.

I much prefer Sylvie's videos. And she puts things into a much more meaningful (truthful) perspective than these professional entertainers do.
Forum Admin
Top

That's a brilliant video and Sylvie makes a point that I have been saying for a long time as well. While the TV show does a really excellent job of showing ancient sites I find their commentary almost laughable and absurd most of the time. And then they have to drag up every hair-brained notion in the book and it makes the whole lot of us real history followers look like nutters as well. Because some of their experts do know alot about what they are talking about. But they get overshadowed by the conspiracy people /tin foil hat crowd. And if they really were telling people something factual, they wouldn't be doing it on TV 7 days a week. (where is my tin-foil hat)

Oh Bob, I love Star Trek too, I want to live in the Star Trek Universe. I think I liked Star Trek Voyager the best. I loved the Doctor especially. Really that entire cast was great. And Next Generation, maybe that is the best series.

Ancient Aliens has jumped the shark I think.
Dreams are real while they last, can more be said of life.
Top
Locked
2 posts • Page 1 of 1

Return to “Discussions of the Topics of the NewEarth Videos”